How does a Metal Detector Discriminate and Identify Metal Types?

Most modern metal detectors can discriminate between several types of metal objects and materials, here in the UK there is a huge amount of rubbish in the ground, therefore, if you do not want to be digging up rusty nails or ring pull tabs all the time it is vital to setup your metal detector to be able to discriminate. 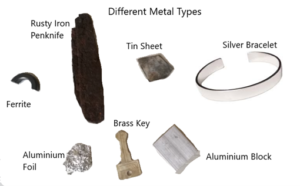 Technically viewed from the user interface (control box) is quite simple, a metal detector with a digital display shows a specific ID with values between 0 to 99. This ID is not like the ID in a database, a specific object might have one particular ID, but a particular ID can refer to many different objects. 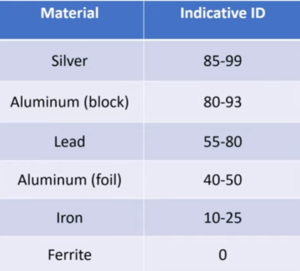 Ring-Pulls for example ID at around 76-77 and a heavy platinum wedding ring has a very high ID of around 90 or even higher, and Aluminium can also have very high IDs, but there’s a big difference between solid Aluminium objects and thin Aluminium tin foil which can have an ID as low as 40, and a solid piece of aluminium can have an ID, well over 90. Lead for example, you will see that it generally shows an ID of between 55 and 80, this value is also dependent on the thickness and the size. Iron on the other hand has an ID value generally around 10 to 25 so much lower. And, as a special material, I have added Ferrite to the table, ferrite is something that you will generally not find often when metal detecting, but it is special in the sense that it has magnetic properties, but it is completely non-conductive. Ferrite generally gives back an ID of around zero.

To measure the ID in practice for the test, a metal detector is setup indoors with the coil placed ‘in air’, the interface control box is nearby connected to an oscilloscope to do the measurement. A small reference coil is placed near to the main search coil to pick up the emitted magnetic field from the detectors coil. The metal detector used for this testing emits a high frequency, an alternating magnetic field in a pure sine wave with a frequency of around 15.3 kHz. 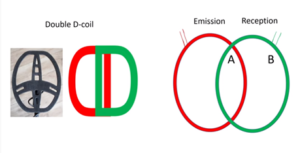 The metal detector uses a double D coil, named after the two shapes of the emission and the reception coil. For the sake of simplicity, the Search Coil shown in the diagram has two circles overlapping each other. 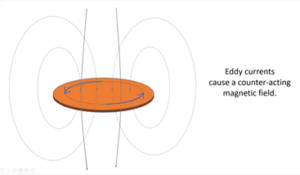 However, it is not insensitive to changes in the magnetic field distribution and this is what the reception coil is looking for. This principle is a very nice trick to achieve a high sensitivity, and it’s used in many different metal detectors, high end metal detectors like the REFLEX G6 can even have two of these configurations in a single Search Coil. 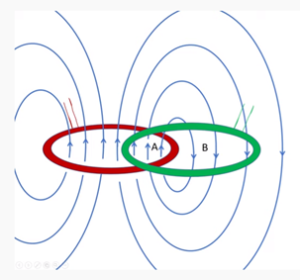 When a metal object gets in the vicinity of this Double D coil it slightly disturbs the magnetic field, and at the same time, the fine balance between the magnetic field in areas A and B. This results in a net magnetic flux through the reception coil, which can then easily be detected.

In the test you can see in the diagram the reception coil, it is indicated by sticking tape on it. The test coil is placed in a position such that the net magnetic field through the test coil is exactly zero, even with enhanced sensitivity on the oscilloscope. 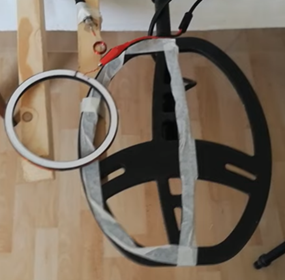 The test coil does not show a signal now, but if a piece of aluminum is moved over the coils, a strong transient signal is observed (Phase Shift). What is observed here is the disturbance that the aluminum causes in the magnetic field distribution axis.

Here are the results –

Starting with silver, a phase shift of nearly 180 degrees is observed with respect to the original magnetic field.

Next is the Aluminium Block, and it also displays a large phase shift. This was measured to be only slightly smaller than the silver so 176 degrees. Now, as mentioned earlier there is a substantial difference between aluminum foil and Aluminium Block in the ID value so if I use a piece of Aluminium Foil, the phase shift drops down to 82 degrees.

Moving to the metal Lead, there is a clear phase shift of 160 degrees, and this is significantly lower than the values of Silver and Aluminium.

The big jump in the phase shift is found when we go to Iron for Iron, we observe a small phase shift of around 20 degrees.

The last shown here is for Ferrite, which shows zero degrees phase shift. Now it is clear that the ideas presented by the detector are somehow directly derived from the phase shift. 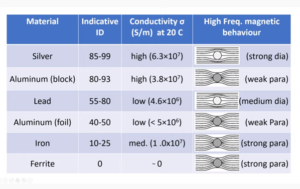 So where does this phase shift come from? Well, it is not a trivial question. The bottom line is that the presence of metal changes the inductance of the reception coil.

Let us look at how the inductance is influenced by the magnetic, and conductive properties of the material. Let us start with the magnetic properties. There are three main types of magnetism in materials, Diamagnetism Ferromagnetism and Paramagnetism. 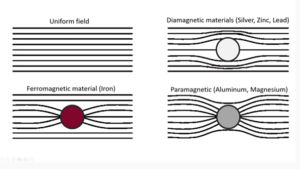 We will leave out the Ferromagnetism for now because it involves permanent magnetisation and since we have a high frequency field it is not playing a role in the detection scheme. So, this leaves us with Diamagnetism and Paramagnetism, in the case of Diamagnetism, the material resists the 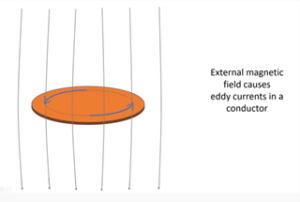 penetration of magnetic fields into the material, and this is because of the electronic structure of the atoms. So, it is a material property. examples of Diamagnetic materials are Silver and Lead. 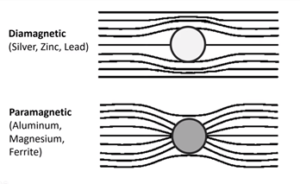 In the case of Paramagnetism, it is the other way around, so, the material is very inviting to magnetic fields. A strong Paramagnetism is for example found in Ferrite, if the magnetic field has the choice to go through air or Ferrite, it will prefer going through the Ferrite. If you consider this affecting the test, the presence of Ferrite in area A will increase the alternating magnetic field of the emission coil, which means that we will detect an interface signal. 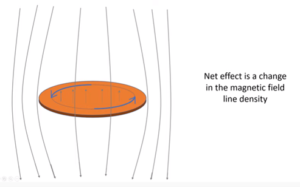 Looking at the table again and add the electrical conductivity and the magnetic properties of the materials. With silver, we can explain the highest phase shift with the fact that it is the best conductor, and in addition has the highest Diamagnetic constant, and both these properties cause a high phase shift.

On this subject we should also cover the triggering of metal, a detector is only sensitive to metal objects that pass the coil with a particular speed. If an object passes the coil very slowly the detector will not give a signal. This shows that the detector is triggered by the occurrence of a fast transient, rather than by the presence of a signal itself. When a trigger occurs, the detector will measure the phase delay of the signal, confirm this phase delay to an ID value in the range of 0 to 99 and output this value to the display of the detector, that is all there is to it, this is how metal detectors discriminate different metal types.